The regular monthly meetings are a cornerstone activity of the Club at which excellent naturalists are invited to inform and delight all who attend. The meetings are open to the public at no charge. The Headwaters Nature field naturalists meet on the last Tuesday of the month (September to November and January to April) at the Orangeville & District Senior’s Centre 26 Bythia Street, Orangeville at 7:30 pm. See our About page for directions.

Steve Burrows has combined bird watching and murder in a series of novels called Birder Murder Mysteries. The first of his four Birder Murder Mystery books, A Siege of Bitterns, won the 2015 Arthur Ellis Award for Best First Novel. Steve is very entertaining speaker and has given presentations at BookLore in Orangeville, as well as at other Field Naturalist clubs.

Catherine Scott has studied spiders around the world and is working on her PhD from the University of Toronto researching spiders, particularly the reproductive lives of Black Widow Spiders. Her talk titled “Eat prey love: the secret lives of spiders” will include information on the natural history of spiders, from local Ontario residents to West-coast and South American species. She talk a bit about her research on black widow spiders, and of course some myth-busting about “dangerous” spiders in North America. A one-sentence summary: “Spiders are among the most misunderstood animals we humans share this planet with, but a glimpse into their world of ingenious silk traps, masterful masquerade, and dangerous liaisons will show that they are far more fascinating than fearsome.”

Catherine maintains a blog SpiderBytes.org to help educate people about spiders and she is a collaborator of a citizen project called “Recluse or Not?” that aims to enhance public understanding or recluse spiders while refining our knowledge of their distribution.

September 27, 2016:  John Muir in Ontario — including our Orangeville area!

Robert Burcher is a Meaford-Thornbury resident. He was one of the local Meaford residents who organized The Canadian Friends of John Muir in order to better understand John Muir’s history in Canada, and especially in the Meaford area. Burcher is now writing a book about John Muir’s time in Ontario.

Kevin Tipson, one of our members, and an orchid enthusiast and photographer will share his passion for our native orchids through photos and stories of his adventures searching for them.

Jason Tabroff, President of the Dufferin Astronomy club will be presenting on the wonders of the night sky, with a special focus on November viewing and celestial events upcoming in 2017. We all share the same sky — let’s get to know it better!

January 31 2017:  A Botanist Traces Spring Northwards along the Bruce Trail.

Mark Whitcombe, our President, will be telling us about his botanist’s perspective of his end-to-end thruhike of 890 kilometres along the Bruce Trail this past spring of 2016. 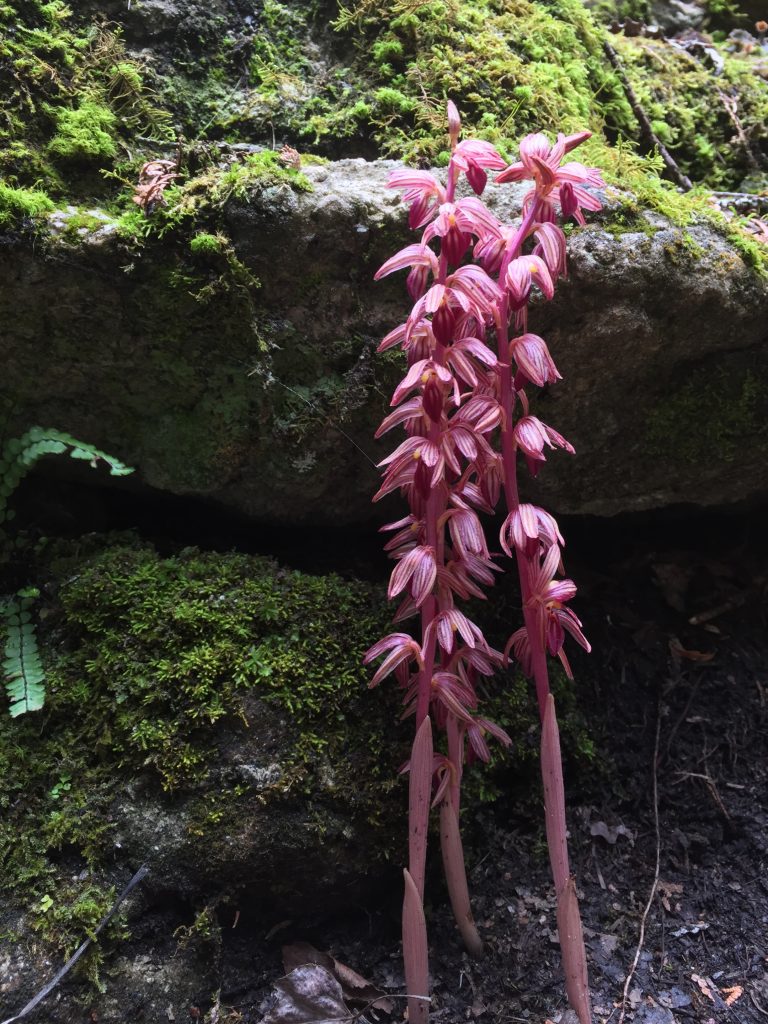 Start thinking now about what you can contribute to our annual evening of sharing nature — photos, short presentation, nature nuggets …

Victoria Macphail will be our March speaker and will talk about bees and bee identification. She was also very involved with the creation of Guelph’s pollinator park so might be able to give some insights on the proposal for a similar park in Mono.

Erica Newton is a scientist who works for the Ministry of Natural Resources, and has engaged in research about a variety of animal species, including wolves and coyotes. Erica will explain the differences between wolves and coyotes, and talk about the animals that we see in our area.  What is a coy-dog?  What is a coy-wolf?  How do we live with these animals in our communities?

Across North America, the estimated number of migrating birds killed annually in collisions with buildings ranges from 100 million to 1 billion birds. FLAP (Fatal Light Awareness Program) is an organization committed to raising awareness of this issue and to educate architects, home owners and municipalities on how to reduce this alarming death toll. A representative from FLAP will give us an illustrated presentation about the work they do and provide us with practical examples of how we can help.  http://www.flap.org/index.php

Dr. Eyles is a professor of geology at the University of Toronto. He is the author of Road Rocks: Ontario, an illustrated book featuring 250 geological wonders throughout Ontario and will be telling us about what we can find in our own “backyard”.

Phil is a Fisheries Biologist from Credit Valley Conservation. His topic is yet to be determined but I’m guessing it will be something about fish!

This will be our third annual night during which we the members of UCFNC will show our stuff.  Photos, specimens, short talks, sharing — everything goes! More details to come!

Graham Findlay is a management biologist with the MNRF.  This is a “must know presentation” as Graham will be speaking about how the deer population is managed in order to meet the needs of nature lovers, farmers and hunters.

David is the Manager of the Watershed Monitoring Program at Nottawasaga Valley Conservation Authority. He will speak about how Minesing Wetlands have changed over time, some emerging issues for the area, and will take us on a virtual tour of the wetlands.

Bill McIlveen is one of the most active and industrious field naturalists in Ontario, with a breadth of background and depth of interests that is truly impressive. He used photographs and examples from around the world to expand our understanding of this important but overlooked ecosystem. Canada has 56% total peatlands in world; Russia second.

University of Guelph Professor Andrew Peregrine conducts research at the Ontario Veterinary College. His primary area of interest is the epidemiology and impact of parasitic infections. His timely talk was about the increasing incidence of Lyme Disease carrying ticks in Ontario.

(The following comments are based on those by Ian Anderson, UCFNC member, and long-time Lyme Disease activist.)

Our April 28th presentation by Dr Peregrine was both fascinating and alarming.

The deer tick that carries Lyme Disease is on the increase and moving North in Ontario due to the combined effect of global warming and annual bird migration carrying tick larvae and nymphs from rapidly expanding areas in the US North East where the disease is endemic. Both our dogs and ourselves, as we walk along trails frequented by deer, are liable to have these ticks attach to us. While dogs are only 5% likely to be infected by a tick carrier of Lyme, our chances are rapidly rising towards 20% and may even go up to 50%+ in future years, depending on location and spread of the infective bacterium.

The good news, if there is any, for humans is that it takes about 36 hours of deer tick attachment in a human for the infecting bacteria in the tick’s stomach to migrate up into its mouth parts and so into the wound they create through our skin. The bad news is that a tick bite contains an anaesthetic and so we do not feel its presence on our skin! Inspection of our body after a bush hike plus our having worn long pants tucked in and long sleeves are the only remedies. Dr. Peregrine recommends daily showering as we are very sensitive to bumps and lumps while showering!

We should note that there is visible difference between the two tick species found in our region – the newly invading Deer Tick, and the long-established American Dog Tick (which does not pose a disease transmission threat to us or our dogs). It is really important to know the difference! Find these two in this chart: http://canlyme.com/lyme-prevention/tick-id-removal  There are also instructions for save tick removal.

Dr. Peregrine recommends adapting to the increasing reality that Lyme Disease is spreading into our area and to learn to take appropriate steps, including long pants (tucked in) and long shirts, DEET spray on the outside of lower clothing, careful inspection after outings (including showering), and inspection of pets. 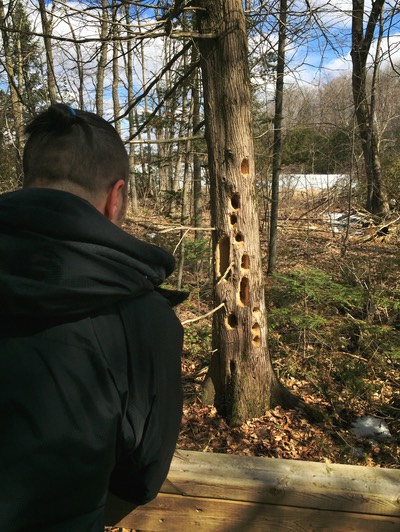 In 2011, Paul Riss did an Ontario “Big Year” during which he fused his passion for birding with tattoos and punk rock music. He talked about his film project called  “Punk Rock Big Year” and his efforts to break the stereotypes that popular culture has of birdwatchers. Paul was a fascinating example of combining birding excellence with high-end creativity and entrepreneurship. More about Paul and his film trailer at  www.punkrockbigyear.blogspot.ca/p/what-is-prby.html

Mark Eastman will be introducing us to Credit Valley Conservation’s innovative new program that brings landowners, growers and buyers together to produce hay in a way that is friendly to grass-land birds.

Past Meeting: October 28, 2014
The Once and Future Great Lakes
Author John Riley

John Riley is the author of “The Once and Future Great Lakes Country: An Ecological History.” Here are a couple of quotes from reviews of John’s book…”a monumental work…compelling narrative,” “a complete historical account of the Great Lakes region, and the different species and societies who have inhabited it over the last 15,000 years….a ‘must read’, particularly for people who inhabit this region.” John lives locally in the Headwaters area and spoke specifically about changes that have occurred in this area.

Paul Chartrand is an artist whose main thematic focus is the interaction between human made and natural environments. He uses sculpture, drawings, living plants and performance to produce installations that engage viewers to think and learn about the environment and how they interact with it. More about Paul and his work at www.paulchartrandart.com

Wayne Townsend well known and celebrated local historian talked about Luther Marsh and it’s transformation from forest to farmland to bootleggers paradise to a biologically diverse and treasured wetland.

Member’s Night UCFN members showed their stuff with displays of variety skulls, stuffed raptors and other nature nuggets. There were interactive displays highlighting activities of our members such as Owl and Piping Plover surveying, maple syrup making and gardening with native plants.  Nature themed paintings, drawings and photographs were presented along with short talks by members.